Home / Questions / Why Bitcoins are so valuable?

Bitcoin keeps high price because it has a limited supply. It can’t be bribed or corrupted and is global. In addition, all the traditional fiat currencies drop in value relative to everything, including cryptocurrencies.

There are a number of reasons why Bitcoin’s price haven’t stopped rising:

1. Bitcoin has a maximum supply

Bitcoin keeps a high price mostly because its supply is limited to only 21 million units. This limit cannot be exceeded, no matter what. That makes, only 21 million available Bitcoins for 7+ billion people on earth. Around 0.003 Bitcoins per person.

Widely available things, like plastic bags, are very cheap, even free. However, rare things, like diamonds, keep a much higher price. Bitcoin’s limited supply makes it scarce, thus with a higher value. It is programmed to be impossible to change this supply limit.

Gold, for instance, also keeps a high price because it is scarce. However, if it becomes as abundant as metal, its price should go down. This is because there is more availability of gold for the same amount of people.

Furthermore, it becomes increasingly difficult and expensive to “create” this digital currency as the number of Bitcoins in circulation nears the 21-million limit. This is how this cryptocurrency is designed. As a result, Bitcoin value should increase over time if the demand for it doesn’t decline.

The traditional currencies (fiat), like USD do not have a limit of how many units there will be in circulation. In the same time central banks constantly print more dollars out of thin air. There is more USD for the same amount of goods and services. As a result, the dollar purchasing power goes down by 2% per year. This is inflation and the US tries to keep it around 2%.

You have the same amount of money, but over time you can buy less with it. The printing of dollar currency is called quantitative easing to sound complex, so people don’t understand it.

Lets look at the money supplies of USD and EUR: 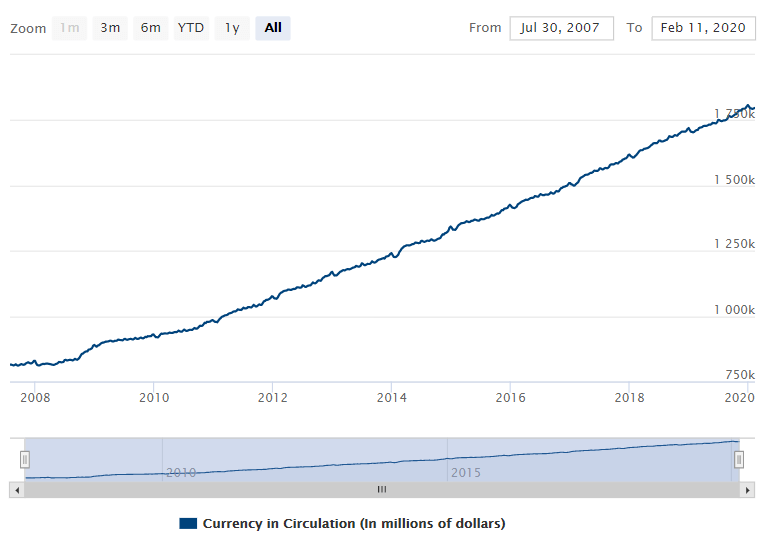 This graph shows the increasing supply of US dollars. Source: the official site of the US federal reserve bank, (see Selected Liabilities of the Federal Reserve)

Central banks increase their money supply’s through printing of new, backed by nothing, currency. They call it quantitative easing, to sound complex to people, so they don’t understand it. Basically, the more money central banks print, the more traditional currencies, like USD lose their buying power. Remember, 10 years ago you could have bought more things for the same amount of money. Right? 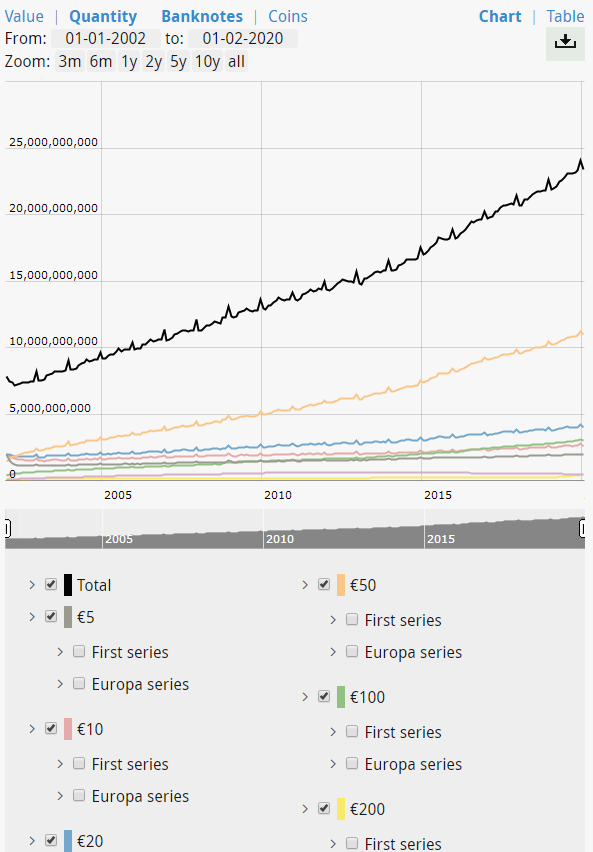 EUR banknotes in circulation from 2002 until 2020. The same trend of constant growth of the available currency in circulation is observed in the European central bank (ECB). Source: official site of the ECB

Printing more money makes traditional (fiat) currencies less rare or scarce. For example, the supply of USD is dictated by the Federal reserve in the US and the supply of EUR is managed by the European central bank (ECB). So, if they decide they need more money in circulation, they can print new bills without a problem. However, this printing of new currency, makes them more available, thus reducing their value. 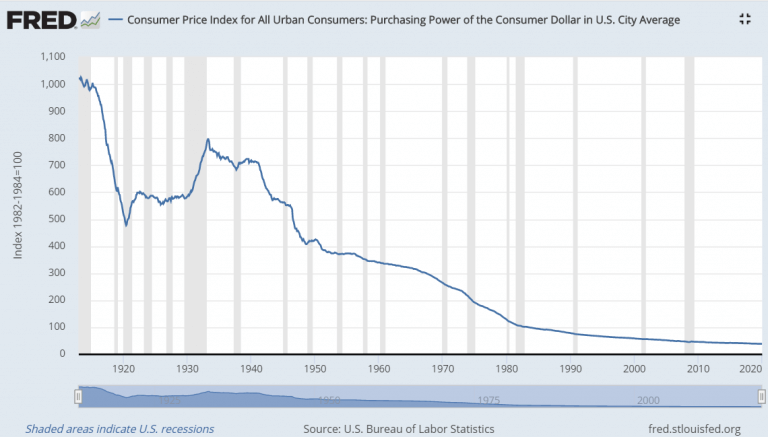 As a result, the value of government currencies, such as the US dollar, reduce slowly over time. This means, you need more dollars to buy the same amount of Bitcoin. You can see exacly how much purchasing power the dollar had compared to previous years.

Bitcoin is not a person and it operates without the need of a human hand. It is just a programming code that follows instructions. There is no man in the world that can stop or influence its operation. For this reason, you can trust Bitcoin as it doesn’t have a concept of value. And, as we know, people with power often get corrupted.

This lack of corruption helps Bitcoin maintain its high price. It functions the same for a president of country or just a normal person. Bitcoin cannot distinguish between the two. This is why you can trust the cryptocurrency.

Other reason why Bitcoins are so valuable is because you can transfer Bitcoins to any point in the world. The fee is the same for international and domestic payments. There is no difference. Furthermore, The global nature of Bitcoin increases its adoption and demand. However, the availability won’t increase. Therefore, more and more people want to have some of those 21 million available coins. This leads to increase in value over time. If the demand for Bitcoin doesn’t stop, in theory, it’s price should constantly rise.

Bitcoin is not tied to any country. It is neutral. That helps it keep balance when countries face economic crisis. For example, Venezuela is currently in hyperinflation. Their national currency is highly devaluated. However, the Venezuelian Bolivar (VEF) is the 2nd most used currency in LocalBitcoins.com.

The increased use of Bitcoin in countries with economic crisis, like Venezuela, increases demand and helps Bitcoin maintain its high price.

Bitcoin keeps a high price, mainly because it is limited in supply. On the other hand, traditional (fiat) currencies does not have that limit and put more and more money into circulation. This reduces their purchasing power. Even if the value of Bitcoin doesn’t change, higher amount of USD will be needed to buy 1 Bitcoin because traditional currencies, like USD lose value over time.

The non-corruptable and global nature of the cryptocurrency also helps to keep the price from going down.