Learn what is Bitcoin and how to use it

Simple explanations that will help you understand Bitcoin

Bitcoin is a new form of digital money unlike any other:

How to buy Bitcoin?

You can buy bitcoin with:

See all ways to buy Bitcoin

How to store Bitcoin?

Learn how to securely store and use your Bitcoins.

Bitcoin (BTC) is an innovative internet currency created by Satoshi Nakamoto. You can send and receive money directly without relying on a bank.

Traditional currencies like USD, slowly drop in purchasing power. This is because central banks print money out of thin air. Remember that 10 years ago, you could have bought more things for the same amount of money, right? This is the exact reason why the anonymous Satoshi Nakamoto created Bitcoin. To provide a form of currency which doesn’t lose value over time and is available to all people in the world. 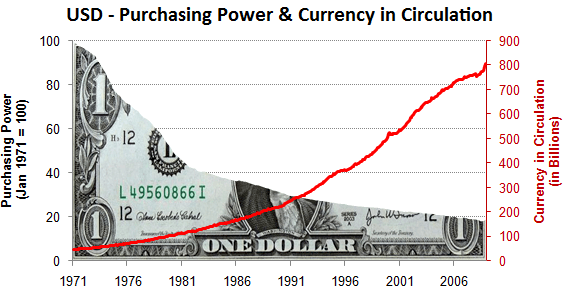 All currencies are worth less when there is more of them. (Source)

Bitcoin is separated from the banking system. People can send money between themselves without the need of a bank. Basically, people who’ve installed the Bitcoin program keep the network alive and secure. They have the same record of transactions and synchronize between themselves. This way, users collectively detect and remove bad actors from the network. No need of a bank. This is called decentralization.

In theory, scarce things, like Bitcoin need constant demand to keep their value high. And the trading volume, which represents the demand has been constantly rising.

However, Bitcoin comes with 1 disadvantage. You’re responsible for your own security. There is no customer support to help you retrieve your coins if you lose your Bitcoin password. Although, careful preparation and use gives you high security and freedom.

Increases its value over time

Only 21 million Bitcoins will ever exist for 7+ billion people. No printing of additional Bitcoins is planned. This makes them very rare, and if there is a constant demand, the price should theoretically increase over time.

Decreases its value over time

Central banks are printing more money, which increases the total amount in circulation. There is more money for the same availability of goods and services. As a result, prices rise, and you can buy less with the same amount of currency.

No financial institutions, such as banks or governments, are involved.
Centralized

Multiple financial institutions process transactions. Each of them can stop the transaction or put limitations.
You are responsible for security

Banks insure your money up to a certain amount.
Bitcoin international payments

Bitcoin has been working 99.98% of the time since 2009
Banks work during business hours

Banks usually operate only during working hours. Not on weekends or nights.

Bitcoin works in a decentralized way.

People who have installed the Bitcoin program are connected directly to each other. Everyone keeps the full record of all BTC transactions. This way, the power to control Bitcoin is distributed evenly between all users. All transactions are open and visible by everyone, unlike with banks, where your balance is private.

The blockchain keeps record of all Bitcoin transactions

How to Buy Bitcoin?

You can buy BTC using the following methods:

We recommend buying Bitcoin from Coinbase or Binance, as they are the most beginner-friendly exchanges. View all the ways that you can buy BTC here.

How to store Bitcoins?

There are different ways that you can receive and store your Bitcoins:

Users can have a private Bitcoin address and password

You can open a Bitcoin account online or through a program not connected to the internet. It creates a Bitcoin address where people can send you coins, and a Private key, with which you can spend them. Similar to banks, where they give you IBAN or account number and a password.

Your coins are stored on the Bitcoin network and you need the private key to move them.

It is extremely hard to guess a Bitcoin private key. The odds of guessing it are:

As long as people keep their private keys a secret, their coins are safe. Their balance is constantly verified by all other Bitcoin users in the world.

How are Bitcoins created?

Bitcoin is designed to bring new coins into circulation when a new block is added to the blockchain. These newly created coins are given to the miners, who add blocks to the blockchain. See step 3 of the “How Bitcoin works” infographic above.

The first coins were created with the “genesis” or first block by Satoshi Nakamoto, the creator of Bitcoin. Now, the Bitcoin blockchain has around 600,000+ blocks and 18+ million Bitcoins in circulation.

The blockchain is a way of storing a record of all Bitcoin transactions. Blockchain allows all users in the world to see the same history of transactions. This makes it possible to collectively verify and secure the network. No central institution, such as a bank, is needed.

The Bitcoin network has never been breached. Only services on top of Bitcoin, like cryptocurrency exchanges, have been breached. A result of their poor security practices. We advise to store your coins on a hardware or paper wallets as the most secure ways.

Why Bitcoins are so valuable?

How Bitcoin is better than other cryptocurrencies, like Ethereum?

What is the halving?

What is a Bitcoin address?

What is Bitcoin mining?

TwitterFacebook
🔝 Back to top