Home / Questions / What is the Bitcoin halving?

The Bitcoin halving reduces by 50% the creation of new Bitcoins. Currently, around 900 new bitcoins enter in circulation per day. After the halvening only 450 new coins will be available per day. This will make Bitcoin more scarce and should increase its price.

Bitcoins has a limited supply of 21 million coins that will exist. However, around 88% or 18.5 out of 21 million Bitcoins are available for use.

The Bitcoin halving represents this decrease of the newly issued Bitcoins by half. After the 2020 halving, 50% less Bitcoins will be released for use each day.

The halving could also be described as a 50% decrease of the Bitcoin inflation rate. This is why it is called the halving.

Bitcoins in circulation per day

Currently, 6.25 new bitcoins are released every 10 minutes. These 6.25 new coins are a reward for the Bitcoin miners who secure the network. They often sell some of it to pay their power costs.

Bitcoin halvings and their effect on the price

The halving events usually increase the price of Bitcoin. The last 2 halvings increased the price around 100x and 30x respectively. This is due to the decreased availability of coins and the constant demand.

The stock-to-flow model is a Bitcoin price prediction model by PlanB(@100trillionUSD). It explains how the availability of Bitcoins affects the price and it is the most widely accepted one in the Bitcoin community. Furthermore, the stock-to-flow model has been statistically validated multiple times, see here, here, here. They conclude that there is a 95% chance that this model will become true, according to statistics. 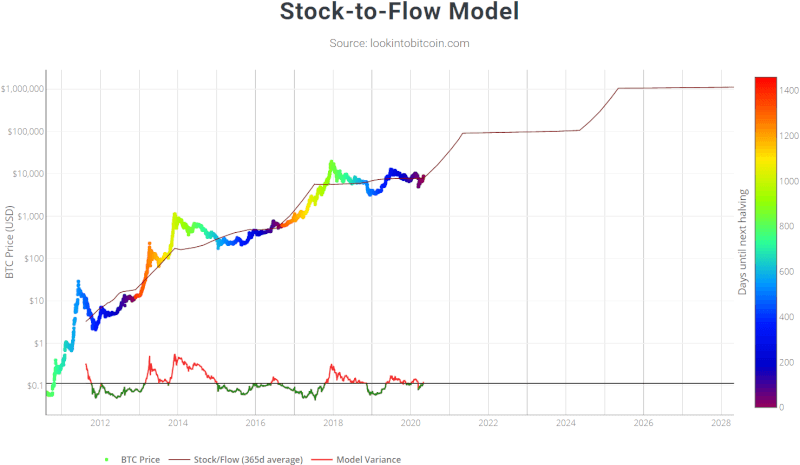 On the second halvening the Bitcoin price was $650 (July 2016) and reached an ATH of $19,500 (Dec, 2017). A 30x increase in price. Bitcoin was widely covered by news which helped grew its popularity. As a result, everyone started to talk about it. It seemed that the halvening triggered this increase in price and people started to fear that they’ll miss out (FOMO). Thus, the price increased strongly to $19,500.

The 3rd halving is yet to come around 12th of May 2020. The newly released Bitcoins will decrease from 1800 to 900 per day. This will make Bitcoin more and more scarce. This should increase the price if the demand for Bitcoins stays the same. We might see a 10x increase in ATH to around $100,000 per Bitcoin if the same trend goes around.

To sum up, Bitcoin had 3 halvings and the price increased greatly after each one of them. The first time by 100 times and the 2nd by 30 times. Halvings are a very good predictor for the price of Bitcoin. However, it remains to be seen what will happen on the 3rd one.